Details for the donations from Indian accounts.


Details for donations from outside India are:
Account Name: SUNSHINE CHILDREN EDUCATION SOCIETY 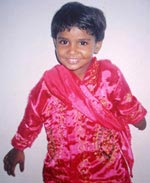 Roshni Poverty and abundance are often to be found side by side in the Indian capital of New Delhi. And those whom poverty hits hardest are also the most innocent children.

They are sent into the streets to beg by their parents, often receiving little, sometimes nothing at all to eat. Hardly any of these children attend schools or have access to medical services.

In 2001, Kuku Arora met a little girl called Roshni on his way to work. She was approximately two years of age, had only one hand and was in a state of absolute neglect. Kuku and his wife Priti started to bring her a little food every day, but one morning she had disappeared. The couple missed the girl and started looking for her. After some time, they found Roshni begging in a very busy main street and that being only 2 years old.

This was the moment in which the Arora's decided to help. They visited the parents and suggested to them that they, Kuku and Priti, could look after the child during the day, providing food, healthcare and education. As Roshni’s parents lived on the street and the discussion between them and the Arora's became rather heated, more and more children came close to listen and finally asked eyes wide open whether they could come, too!

This is how the wonderful idea was born Twenty One years ago to give the kids from the streets the gift of a safe and happy childhood. It was only the next day that Kuku and Priti started out with no less than 17 children. They named their remarkable task 'Sunshine Project'.

Class Room They rented a room, which could today be called a day-care centre for children. Apart from the hours at school the children spend time there between 9 am and 6 pm. They receive tutoring for school, play, dance and go on outings to a nearby park and even watch TV together. In a nutshell Kuku and Priti offer them what most of us would take for granted as a 'Normal' childhood.

Seven hired teachers and several volunteers from various countries support the children, often individually. So they qualify for a government school as soon as possible, age considered. Due to large age differences between the children, it is impossible to teach them as a whole group, therefore more than one teacher is required. Furthermore the children are partially taught in English in order to qualify them for future positions on the job market.

Apart from the teachers there are also two helpers who among other things, take care of the children's hygienic needs. We are so used to washing ourselves regularly, brushing our teeth, cutting our fingernails or styling our hair because our parents who also lived by these standards have trained us in these skills from our earliest days. With the children by contrast these skills have to be learnt from scratch. For instance most of the children were afraid of water at first. Their parents often neglected them on purpose to make them look more miserable and needy for begging inducing more compassion this way. Kuku handed over toothbrushes to all children and explained that these were personal items not to be shared with anyone. Subsequently he was told by a few parents that their children took their tooth brushes to bed with them because they were so happy to own something for the first time in their lives.

But it is not only education, shelter and food that the children are provided with but also, equally important, love, attention and emotional support by Kuku and his wife. Who spend long hours talking to parents in order to prevent abuse or go to great lengths to bring families in dispute back together again.

The children learn and experience what it means to support each other. New children are tutored by older ones. So they learn to assume responsibility which is something they would never have experienced at home. 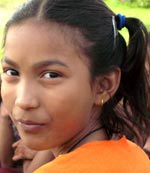 Highly Gifted Firdose Kuku provides shelter to all faiths in his house. Children of all creeds Hindu, Muslim and Christian find a home here. Once a Muslim father did not allow his highly gifted child to attend a specialized school because he considered this to go against Allah's will. Had Allah intended for his child to be educated. She would have been born into a rich family and as a boy, he argued. Kuku a Hindu, replied: If Allah did not want your child to attend this school, why would he have sent me to talk to you? The father gave his permission.

School fees are not overly high in India. For all children to attend school Kuku and Priti have to pay a school fee to schools every month. However the school related items can be quite costly if paid for on a regular basis. Despite the poverty, school uniforms are compulsory in India. Kuku managed to equip all children with uniforms which involved not only tailoring them (which was already difficult enough as most schools create more income by selling their own uniforms) but also purchasing ties, belts and black shoes. Furthermore the required books and stationary amount also has to be borne by them along with the extra tuition fee for some children. Also to be considered are transport costs to and from school to the house. 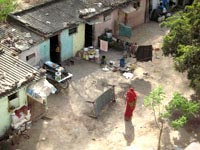 Home of Some Sunshine Kids In the case of emergencies, the children have access to medical help. As for regular care there is not enough money to provide for the necessary prophylactic vaccinations. Especially during winter, Kuku and his wife worry about the health of each child because winters are cold in Delhi and the children hardly have any warm clothes to wear. There is no money to provide them with mattresses but even if there were, there would not be enough space for them in the often tiny flats they live in. Needless to say these families live without electric power and hence have no heating while temperatures can drop to 3 degrees celsius at night.

Kuku is struggling to provide the kids with one proper meal a day. Unfortunately this means that there is not enough money to buy more than one banana and one biscuit per day for them which is often all they eat all day.

However he fights hard for them and works long hours to provide them with the best possible care. This means that his own family has to do without some of the 'luxuries' we take for granted but Kuku, Priti and their own two children are gladly prepared to put up with this. 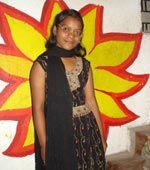 Ravita Kuku went through many crises, thinking he could not carry on neither financially nor emotionally. For instance when 13 years old Ravita's performance in school deteriorated. It was soon clear that the problem was her short-sightedness. She was diagnosed with -5, 5 dioptre. Without spending too much thought on it. Kuku promised to buy glasses and ordered them. Two days later they were ready to be delivered. When told the price, Kuku realized that he didn't have that kind of money at all - 2000 Rupees or $40. It would simply blow his budget. But he did not have the courage to tell the girl the truth, so he called his wife to let her know that he had decided that they would have to abandon the whole project. He felt that all those incidents of having to disappoint the kids over and over again would be just too much to bear for him emotionally. His wife advised him to come home before making a decision. Surely there would be a way out of this. So, they borrowed the money from his mother-in-law and bought the glasses. But the plan was still to give up the Sunshine Project. But when Ravita put on her new glasses, smiled and told Kuku how lovely it was to be able to see him. It touched his heart and gave him the strength and will to carry on.

Today, the project gives shelter to over 267 children. Compared to the extensive neediness to be found all over India. The project may appear like a drop in the ocean, but whoever has had the privilege of looking into the happy eyes of the kids will treasure this image and always return to this very special memory with love.

The Sunshine Project’s mission is to build a bridge across the divide between the needy and the rest of society by offering the children a dignified and happy childhood.

The children themselves are so grateful and joyful for having received this help. The moments you spend with them, learning about them and their stories will touch you and remind you that the world not only revolves around your own needs.